Wedding season is here. We have your back. Questions? >> Jen@bridesmaidforhire.com

Everyone you know was once a stranger to you. Look to your left. Who is there? Right now, it’s my roommate. One day, I knocked on the door of her already decorated Manhattan apartment with two gigantic suitcases covered in luggage tags that read: If found, please return to Boca Raton, Florida. I had only been to NYC twice before and I decided, on the spur of the moment, to pack up my belongings and move. So there I was, knocking on a stranger’s door I found through Facebook, giving her a hug hello and saying something prematurely awkward like, “Hi, I’m Jen, looks like we’ll be spending the rest of our lives together! Almost three years later, we’re still calling that gorgeously small place our home. How about your best friend?   My best friend Jaya and I were at first strangers at a school of 65,000 students, until we both signed up for the same dance competition and were matched as partners for the routine. When the day finally came for us to perform, she kicked me in the head and I dropped her – on stage. We’ve since spent 8 birthdays together, a month traveling around Europe, and now live at the end of a short diagonal line from each other in New York City. 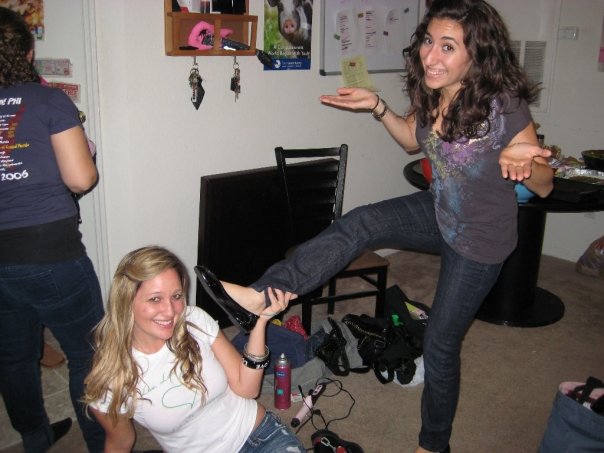 Jaya and I reenacting the day we went from being strangers (to awful dance partners) to best friends.

How about your doctor, who was merely just a white-jacketed stranger before you started going to him when times were snotty or trying to call his personal cell phone at 5 am because you couldn’t stop coughing and you’re worried you have some kind of Medieval plague. Or your boss. Someone who before you had the opportunity to meet in person, you probably took to memory the contents of his LinkedIn profile and then, tried to sit up straight and repeat the most interesting things about yourself to him so that you’d land the job. I met my first bride, Ashley, on July 17th  – exactly 7 weeks before her wedding. Ashley sent me an email after reading the story about Bridesmaid for Hire on The Knot, and opened up to me about her own wedding planning skills and how she recently had a falling out with her closest gal pal – who was supposed to be her Maid-of-Honor. We started working together, officially, only three days after she pressed the send button on that very first email. During those 7 weeks, Ashley and I worked together virtually. We had our weekly scheduled “Ashley and Jen hour” where with 6 states separating us, we’d chat about anything she needed to talk about. The conversations included a mix of pop-up problems that needed a solution or a list of action items that we’d work on together. Things like: brainstorming fun and fresh bridal shower games, picking out a unity candle, discussing how to get the final handful of people to RSVP, what should be included on the day-of itinerary, and lots more. To keep organized, I set Ashley up with an online program that hosted our  virtual to-do list. That way, Ashley could go on, daily, and spill out everything that was crowding her mind that she needed to get done. From there she’d mark her progress and we’d leave little notes for each other. 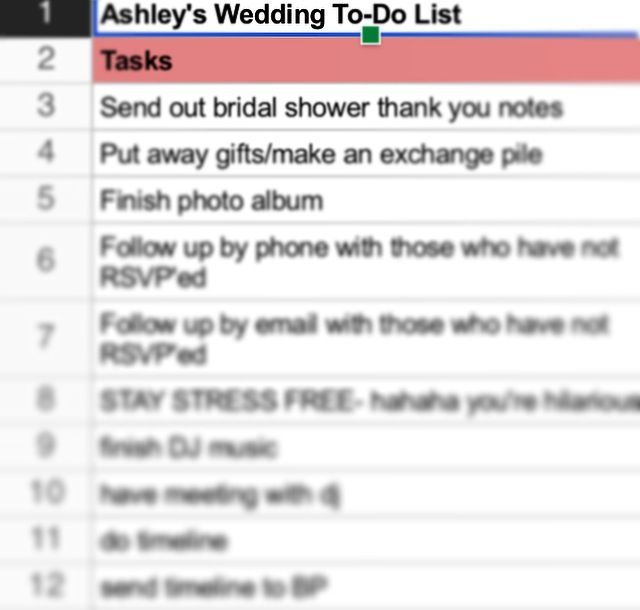 The day before I left for her wedding, Ashley and I ran through her day of packing list, so that she wouldn’t have to toss around the feeling of, “I think I’m missing something”, on her wedding day. We ran through a minute-by-minute outline of how the day would go and all the items we’d need have on us to tackle them. I told her that as long as she had her dress, the rings, and the groom checked off her list, I’d  be there to worry about the rest for her. 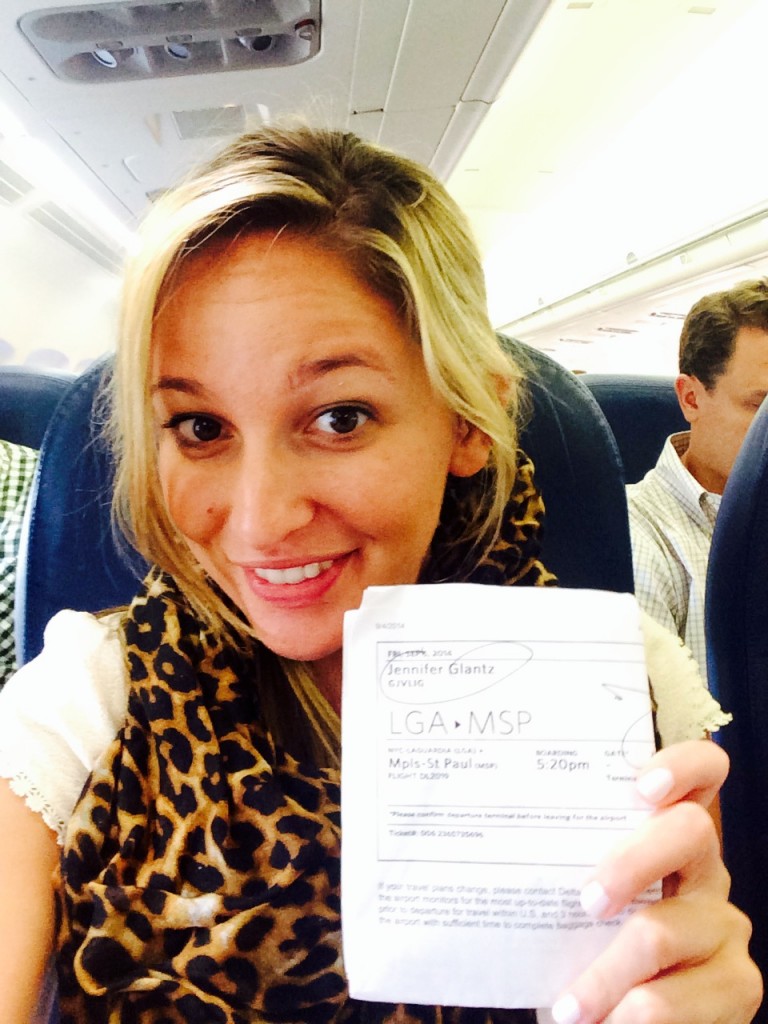 “Well,” she says to me, as her freshly manicured nails flip open her laptop, “Are you nervous?” She is the stranger sitting in 9B.  She asks me why I’m heading to Minnesota and I tell her everything, starting with how Ashley and I met on July 17th. Underneath the seat in front of me, are my two bags. One’s a purse filled with my notebook and my bridesmaid survival kit. Inside are the essentials that everyone in the wedding party may need to tap into throughout the day and the night. There’s a handful of band aids, bobby pins, tissues, Advil, mints, safety pins and more. The other bag has 2-days worth of clothes, a pair of heels, and a pair of comfy flats to run around in. 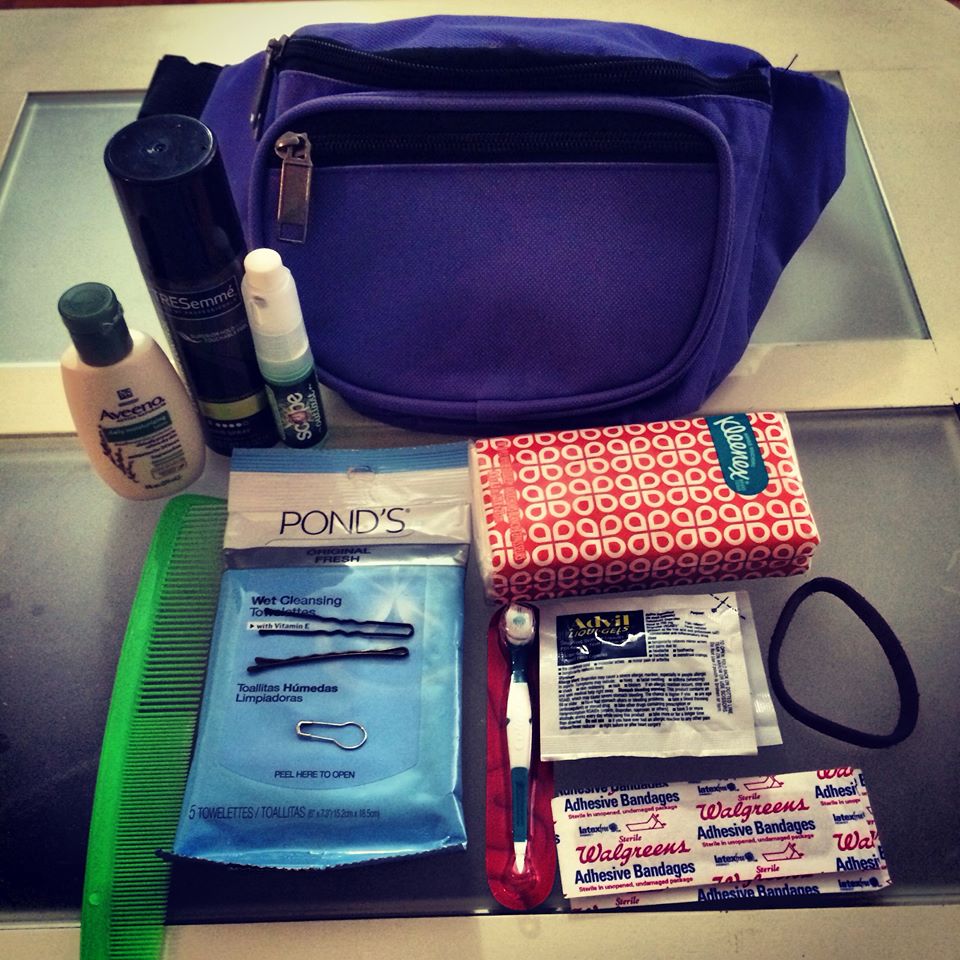 “Not at all,” I say. Which is true. I’m feeling a lot of things right now: excited, hungry, a bit cold, but I’m not nervous at all. Nerves are what crawl inside of our gut when we’re not prepared for something. I’ve been preparing for this my whole life. Well, maybe not my whole life, but at least since I was 7 and I used to facilitate weddings for my pile of nicely groomed Barbie Dolls. Teresa was the ultimate bridesmaid for Barbie and Ken and that was only, I was certain, because I was the one behind Teresa’s every move. Since then, I’ve been a real-life bridesmaid for more than a half-dozen of my own friends. I started out making every single mistake a bridesmaid could make: bringing lingerie to a bridal shower, not bringing enough Advil to the bachelorette party, and ordering my bridesmaid dress only a month before the wedding – leaving no time for professional alterations and instead, having to use duct tape and safety pins to make the dress fit properly. “But you won’t know anyone there,” she says with a concerned undertone, as if she wants to give me a hug or an exit strategy for the adventure i’m about to embark on. I hardly ever do. I’ve always been the kind of person to show up at a party myself or go somewhere without a plus one. To walk up to a stranger on a lonely park bench in the middle of winter and ask them what’s on their mind. To strike up a chat with someone I don’t know in the dressing room of Forever 21 over the details of a cocktail dress they are draping around their delicate bones. My first job out of college trained me for that. I was hired to work for a sorority as a Traveling Educational Consultant – which meant that my full-time job was to walk onto the campus of a new university (on a weekly basis) and work with a group of young women I had never met before. Often I was there to help them through challenging situations (like hazing or recruitment issues or how to patch the holes in absent leadership) – and at first,  I wasn’t welcomed with warm hugs or giant smiles. Those came, if they did ever come, with time – with respect and with getting to know each other. This job made me become immune to the fear of helping strangers. We’re flying over Michigan, the pilot announces proudly from the cockpit. 9B dives into her  overcrowded inbox and I open up a chapter in a book i’ve read many times before. I stumble upon a quote that I start drawling circles around with my JetBlue ballpoint pen: “Be fearless. Have the courage to take risks. Go where there are no guarantees. Get out of your comfort zone even if it means being uncomfortable. The road less traveled is sometimes fraught with barricades bumps and uncharted terrain. But it is on that road where your character is truly tested And have the courage to accept that you’re not perfect nothing is and no 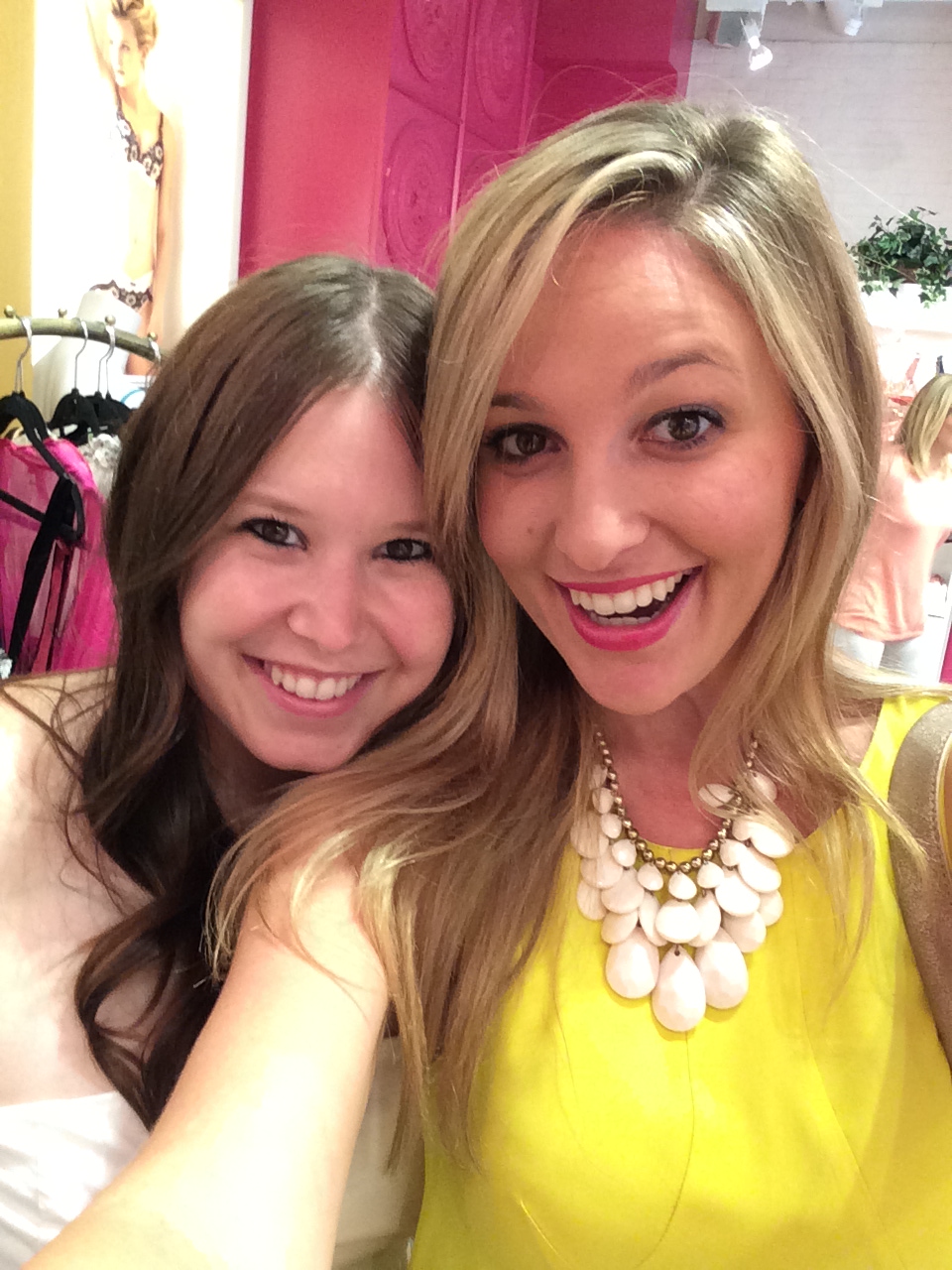 Minnesota is a different kind of beautiful. It’s not supermodel gorgeous like NYC works hard to be or Los Angeles kind of fancy. But it’s something special. You can hear the mosquitoes buzz and watch the wind blow through the deeply rooted broadleef trees.

Ashley just got back from her rehearsal dinner and she is practically glowing in her white cocktail dress. Ashley isn’t a stranger anymore. Over the past 7 weeks, we’ve spent hours together on the phone. We chat on a first name basis about the people who mean the most to her in her life and I’m familiar with her pet peeves and favorite things. Ashley has three other bridesmaids who will be standing beside her on her wedding day; she didn’t hire me to replace any of them. Instead, she asked me to join the “party” to be her bridesmaid expert and her weekly pair of ears to help guide her through any challenging situations or stressfull problems that suddenly pop up. Her bridesmaids were still going to be there to do the job they know how to do the best: be her friend. They threw her a memorable bachelorette party and sat beside her as she opened up her gifts at her bridal shower. And now, as they prepare to bust out their dance moves with her on her wedding day and make her feel relaxed as they all get primped and pretty in the morning – I’ll be there to make sure the dirty work is handled so they are not taken away from the fun. Her maid of honor welcomes me with open arms when she walks through Ashley’s front door and as the clock starts beating seemingly quicker and quicker, it’s time for us to tie a bow on all of the last minute items on Ashley’s to-do list. 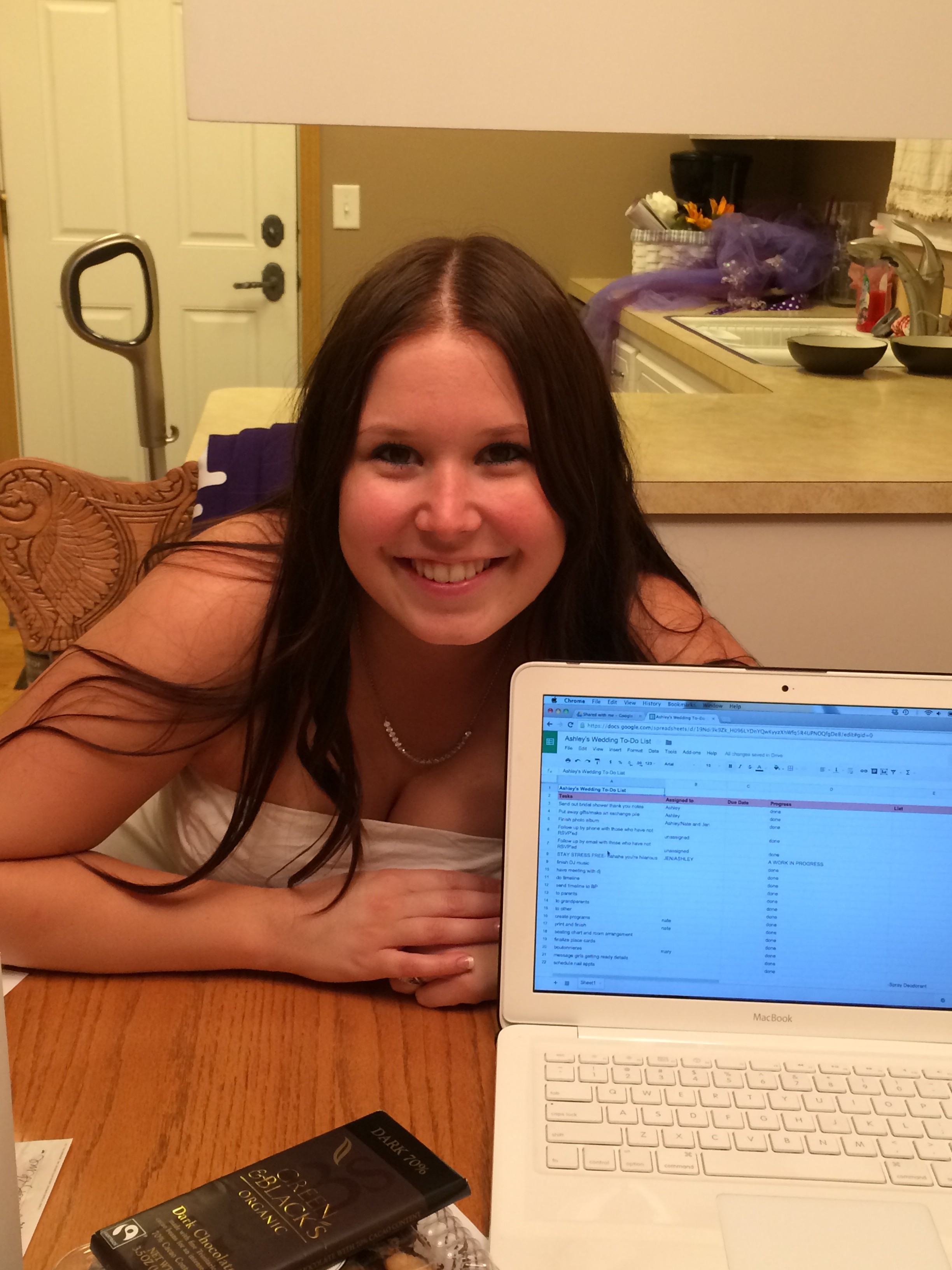 Around Ashley’s  table, we go over a list of fun pictures Ashley wants to make sure the photographer captures, and gather all the things that need to be packed and put them downstairs by the front door. Ashley and I run through the itinerary for the next day and she fills me in on messages she wants me to deliver to the ushers or other members of the wedding party. By now it’s 11:30pm. Our voices are starting crackle from all the chatting and all of our eyes are starting to droop. I remind Ashley that she needs her rest and as we hug goodnight and go our separate ways – I can’t help but remind of all the excitement she’s about to walk into tomorrow. Ashley’s already told me before about something called a Minnesota Goodbye, which truly refers to the length of time it takes people to actually say goodbye and part ways.  So we chat on and on, until again the clock reminds us that the sun will soon begin to rise. “Thank you for being here,” she says as she begins to head upstairs. You can ask yourself this: how long do you need to know someone until they are no longer a stranger anymore? Maybe there’s no length of time. Maybe strangers are the people we’re supposed to bump into, to welcome into our lives in order to make things better. Make things more interesting, more clear, more complete. There are so many strangers out that who can become so much more to us – if only we let them. “Thank you for having me, Ashley,” I say. “Get ready for the best day of your life.”

Ps. The adventure continues! Next Monday, I’ll post Part 2: Love is Like a Fanny Pack and the Monday after that I’ll post Part 3: The Morning After – so stay tuned!